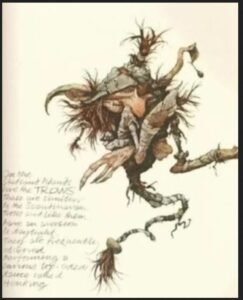 The trows of Shetland

. . . are among the creatures of folklore that can be glimpsed in the world of the Bitterbynde Trilogy.

Here’s an extract from Book #1 The Ill-Made Mute:
Moonrise came early. Beside Burnt Crag the night orb came up like a copper cauldron and seemed to hang suspended over the hills, at the lip of the horizon. It was then that the music
started up—thin music like the piping of reeds but backed by a rollicking beat made by rattling snares, and the deep thumping thud of a bass drum—music to dance to under the face of the moon.

And, in a clearing not far from the campsite, were those who danced to it—a circle of small gray figures moving awkwardly, without grace.
Thorn laughed softly.
“Come—let us see the henkies and the trows,” he said. “They might bring us joy this night.”
Diarmid demurred, but Imrhien stepped out bravely beside the Dainnan, and they walked together to join the dance.
The quaint, dwarfish folk were silhouetted against the towering shield of the rising moon, black intaglio on burnished copper. Some capered in a bounding, grotesque manner, others
danced exquisitely, with an intricate though uneven step.
From tales told in the Tower, Imrhien knew a little about trows and henkies. They were relatively harmless seelie wights, and their dances did not lure mortals to their deaths in the way of the bloodsucking baobhansith and others. Whether they would take offense at being spied upon was another matter.
The Dainnan did not try to conceal their approach but moved openly across the turf. Tall against the moon’s flare, graceful and lithe as a wild creature, he seemed at that moment
to belong more to the eldritch night than to mortalkind.
The dancers, engrossed in their fun, did not seem to notice the arrival of visitors—the pipers continued to pipe and the drummers to drum. Not as stocky as dwarves, these wights
ranged in height from three to three and a half feet. Their heads were large, as were their hands and feet. Their long noses drooped at the tips, their hair hung lank, stringy, and pallid.
Rather stooped was their posture, and they limped to varying degrees. Imrhien was reminded of club-footed Pod at the Tower—Pod the Henker, he had named himself.
All the wights were clad in gray, rustic garb, the trow-wives with fringed shawls tied around their heads. In contrast with their simple clothing, silver glinted like starlight at their wrists and necks.
The Dainnan turned to Imrhien and swept a bow worthy of a royal courtier.
“Lady, shall you dance with me?”

The Trows of Orkney and Shetland. From the Faery Folklorist blog.

Shetland folklore series: Trows. From the “Shetland with Laurie” blog.

What is a trow? From Orkneyjar.