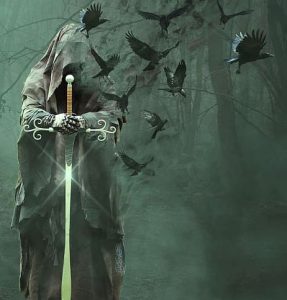 Image courtesy of Dieterich01 on Pixabay.

THE FOLLOWING is probably far too much geeky/nerdy information for most people, but it’s important to me because I invested a lot of time and thought coming up with the term “Faêran” for my books. And it should never be confused with an Old English word that has nothing to do with it!

Question for CDT: What is the correct usage of the term ‘Faêran’? And did you invent it?
Reply: Yes, I did invent it. It first appeared in print in 2001, when The Ill-Made Mute was published. Since then, the word ‘Faêran’ has sometimes been mistakenly confused with the Old English ‘faran’ – ‘to frighten’. The confusion arose due to the normal dictionary practice of using phonetic spelling. The phonetic symbol ‘æ’ represents the short ‘a’ vowel sound, as in ‘sad’, so the word ‘faran’ is shown in dictionaries as ‘færan’, to ensure that it is pronounced properly. In the International Phonetic Alphabet, this letter is called ‘ash’.

Wikipedia: ‘Æ (minuscule: æ) is a grapheme formed from the letters a and e. Originally a ligature representing a Latin diphthong, it has been promoted to the full status of a letter in the alphabets of many languages. As a letter of the Old English alphabet, it was called æsc ‘ash tree’ after the Anglo-Saxon futhorc rune which it transliterated; its traditional name in English is still ash.’

As for my thoughts on the correct usage of the term – it can be used as a collective noun or an adjective. For example, no one is ‘a Faêran’. They must be ‘one of the Faêran’. To get it wrong would be like saying someone is ‘an English’. An artefact can be of Faêran make, but no one speaks ‘Faêran’ – they speak ‘the Faêran tongue’ or ‘the Faêran language’. Ideally the written word should include ê (e-circumflex) – i.e. ‘Faêran’.
If you managed to read through to the end of this post, you are a word-nerd after my own heart.