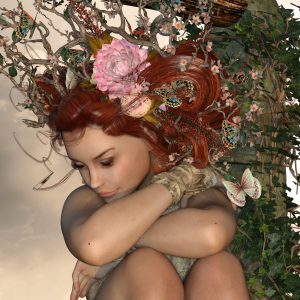 Image courtesy of Mysticsartdesign on Pixabay.

ON HIS BLOG “Every Day Should Be Tuesday”, H.P. has posted a piece titled “Pre-Tolkien Fantasy Challenge: Howard, Moore, and Dunsany“.

In it he notes that “One of the things that struck me rereading The Lord of the Rings this summer . . .  is the otherworldly nature of the elves. The movies of course miss this entirely, as do his imitators. [In The Lord of the Rings] Legolas isn’t a superhuman archer; he doesn’t really come off as human at all. The otherworldliness of the elves in The King of Elfland’s Daughter is much more marked. . .

“. . . It is the otherworldliness, evoking a sense of wonder, that most stands out, as distinctive in Dunsany’s tale, present but more subtle in Tolkien’s, and entirely absent from his imitators.”

I must agree with H.P. and extend the idea to cover not only elves, but also the Faêran, wights and vampires. In modern literature, movies and games, elves and vampires are usually depicted simply as good-looking humans with supernatural abilities. They think like human beings. Their emotions are typically human.

Yet Dunsany, Tolkien and students of the great folklore collector Katharine Briggs know that this is as far from the original conception of these creatures as it is possible to be. These magical, non-human beings have a completely different, unhuman mindset.

H.P. writes, “an elf can never understand a human,”  and I would add that human beings can barely fathom the minds of elves, the Faêran, wights, or indeed vampires as they were originally conceived. Even the look of these beings has changed. Vampires, for example, were first described as  being bloated, with flushed or dark faces – very different from the slender, pallid vampires that became fashionable in the early 19th century.

Take, for example, the Drowner in my novel The Ill-Made Mute. This unseelie wight takes the form of Sianadh’s sister and calls to him with her voice, to lure the man to his death beneath the river. When her attempt is sabotaged and she fails:

‘The drowner, cheated of her prey, did not scream in rage. No recognizable expression crossed her delicate features. She reacted in no human fashion.
“Kavanagh, Kavanagh,” she called, or chanted,
“If not for she,
“I’d have drunk your heart’s blood,
“And feasted on thee.”
Having spoken, she subsided gracefully, leaving a faint turbulence.’

Of course, since elves, the Faêran, wights and vampires are fictitious, it could be argued that there is no right or wrong way to depict them, but to discard their otherworldliness is to strip away their most magnetic and intriguing qualities.

It is too easy to transform them into superhumans. Too easy, and far too boring!