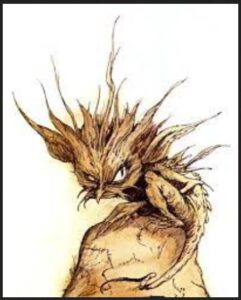 Spriggans are creatures from Cornish faery lore. They’re particularly associated with West Penwith in Cornwall, UK.
These malevolent “unseelie” wights are mentioned in editor Joseph Wright’s 1905 book “The English Dialect Dictionary. Vol. V” and eleven years later in one of my favourite books, Robert Hunt’s “Popular Romances of the West of England”, but the oral storytelling tradition places them much earlier than that.

More recently, in the 21st century, spriggans (or at least the term “spriggans”) seem to have been kidnapped by “The Elder Scrolls”, a series of action role-playing video games.  “Spriggan” is also the title of a Japanese manga series  (スプリガン).

In the original folklore tradition, “Spriggans were depicted as grotesquely ugly, wizened old men with large childlike heads. They were said to be found at old ruins, cairns, and barrows guarding buried treasure. Although small, they were usually considered to be the ghosts of giants and retained gigantic strength, and in one story collected by Robert Hunt, they showed the ability to swell to enormous size. Hunt associated these spirits with the hillfort known as Trencrom Hill in Cornwall.

“Spriggans were notorious for their unpleasant dispositions, and delighted in working mischief against those who offended them. They raised sudden whirlwinds to terrify travellers, sent storms to blight crops, and sometimes stole away mortal children, leaving their ugly changelings in their place. They were blamed if a house was robbed or a building collapsed, or if cattle were stolen. In one story, an old woman got the better of a band of spriggans by turning her clothing inside-out (turning clothing supposedly being as effective as holy water or iron in repelling fairies) to gain their loot.

“On Christmas Eve, spriggans met for a midnight Mass at the bottom of deep mines, and passersby could hear them singing. However, it was not spriggans but the buccas or knockers who were associated with tin mining, and who played a protective role towards the miners.

“Based on the collections of Robert Hunt and William Bottrell, Katharine Briggs characterized the spriggans as fairy bodyguards. The English Dialect Dictionary (1905) compared them to the trolls of Scandinavia.”

Being a fan of the great folklore collector Katharine Briggs, I too depict spriggans as faerie bodyguards in The Bitterbynde Trilogy.