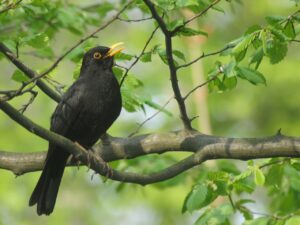 In the Fantasyland of my daydreams, if the Bitterbynde Trilogy were made into a movie, what would be on the soundtrack?

Birdsong is the soundtrack of my life. I live in a rural area that abounds with wild birds and their carolling is the backdrop to the hours of my days. In particular I love the pure, natural, non-studio-modified, songs of the blackbird, the Australian magpie, the grey shrike thrush and the pied butcher-bird.

Why is birdsong so calming?

BBC News reports, ““People find birdsong relaxing and reassuring because over thousands of years they have learnt when the birds sing they are safe, it’s when birds stop singing that people need to worry. Birdsong is also nature’s alarm clock, with the dawn chorus signalling the start of the day, so it stimulates us cognitively.”

If you want to listen to recorded birdsong, make sure it’s from a company that does not “mix” the sounds in a studio. Listening Earth produces recording that are pure as nature intended. Why is this important? Because, as Andrew from Listening Earth explains – in nature, each bird species has its own “bandwidth” on the sound frequency spectrum. This is important for their survival, because it means that one species doesn’t drown out another. When humans “improve” on natural birdsong by overlaying tracks in a studio, that natural separation can be lost. We may not be consciously aware of it, but something in our primitive brain areas detects a wrongness about the mixed sound, which can give rise to a feeling of unease.

Nature, natural habitats and wild creatures are an integral part of the Bitterbynde Trilogy, which is why birdsong is so perfect for the movie soundtrack.

Two traditional British folk-songs that – in my opinion – might have been taught to us by the faeries are Brigg Fair, and Bushes and Briars.

“Brigg Fair is a traditional English folk song sung by the Lincolnshire singer Joseph Taylor. The song, which is named after a historical fair in Brigg, Lincolnshire, was collected and recorded on wax cylinder by the composer and folk-song collector Percy Grainger. It is known for its use in classical music, both in a choral arrangement by Grainger and a subsequent set of orchestral variations by Frederick Delius.” [Wikipedia, Brigg Fair]
When I first heard Brigg Fair, I was instantly enchanted. I heard the old, crackly  version first recorded on the wax cylinder (now digitised and copied) , sung unaccompanied by Mr Taylor. You can hear him singing online at the British Library Sound Archive as part of the Percy Grainger Collection. Or here on YouTube.
I dislike both Grainger’s and Delius’s versions of Brigg Fair; they sound too melancholy and haunted, and far too pretentious for a folk song. I am, however, a huge fan of the fact that they both loved the tune, and that Grainger collected original folk melodies, (and as a side note, for many years I used to walk past his childhood house on the way to the dentist).
What is it about the tune of Brigg Fair that makes it so strangely appealing? It’s hard to say…
It’s the entire melody. For example, the placement of second last note in the eighth bar seems to be somehow elusive and surprising, like the song of some wild bird. (There’s a note like that in the fourth bar, too.)
It’s only a middle G (G4) but it’s a tone above the note you are expecting at that point. In fact I have heard people who’ve not properly learned the melody singing or playing the notes you expect, the notes they expect, rather than the notes in Joseph Taylor’s original. It makes the tune seem bland – just those tiny differences.
Too much nerdy information? Probably, but hey – this is my blog. 🙂

“Bushes and Briars is an English folk-song. A phonograph recording was supposedly made in 1904 of Mrs Humphreys of Ingrave, Essex by Lucy Broadwood and Ralph Vaughan Williams, although the version available in the British Library Sound Archive is more likely to be of Broadwood herself. The recording of Mrs Humphreys was included in 1998 on the EFDSS anthology ‘A Century of Song’. ” [Wikipedia, Bushes and Briars]
I adore the music of Ralph Vaughan Williams. I also like this version of the song by The Bread Witch on her YouTube channel Eat, Bake, Sing, and I think you will, too.

In no particular order: The Chieftains, Trevor Jones and Randy Edelman (the soundtrack to Last of the Mohicans), The Battlefield Band, Clannad, Riverdance, Loreena McKennitt, The Bothy Band, Steeleye Span, Fairport Convention, Joan Baez and more . . .

What? High school recorder bands are on this list? Yes. All I can say is, their music sends delicious chills up and down my spine. I am captivated by their unpolished rawness. It’s probably something to do with the fact that each instrument is usually slightly out of tune and indeed slightly out of synch with the others. High school recorder band music is plaintive, thrilling, bittersweet, and underrated!