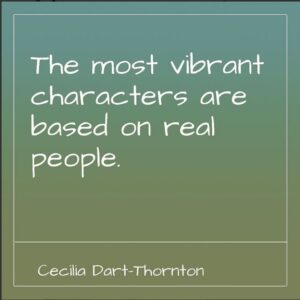 Real people are pretty much more interesting (not to mention hilarious) than any character you’re likely to invent out of thin air.
Listen, look and learn from the people around you. You’re surrounded by a goldmine.

In the Bitterbynde Trilogy, for instance, I drew inspiration for the red-haired pirate Sianadh by observing a friend of mine. 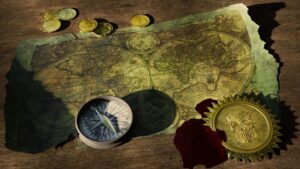 Here’s an extract from The Ill-Made Mute, in which we meet Sianadh for the first time:

The pirate’s crew were thieves and cutthroats recruited
from the dregs of cities, or simple country lads who had been
seduced to piracy by tavern talk and could not now go back,
or disillusioned soldiers; men who looked for rich rewards
preying upon the Merchant Lines or who sailed in the sky
for their own reasons. One of these stood now before the
prisoners, his feet braced apart on the planks, his brawny left
arm roughly bandaged where he had sustained a wound from
a poniard. The lad squinted up at the head outlined against the
sails. Tangled red hair like stiff wire had been randomly knotted
with thin braids; in the thickets of it, a gold disk winked from
his left ear. Blue eyes squinted over a ginger mustache that,
although bushy, was clipped short. A copper torc clasped his
bull-neck, from which also hung a tilhal of amber with two
coupling flies trapped inside. A stained taltry hung from his
shoulders. 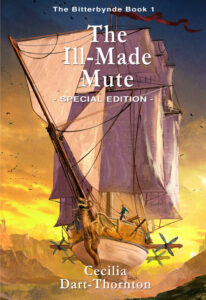 His barrel chest was swathed in a torn shirt that
had once been white, overtopped with a rabbit-skin jerkin, and he wore olive-green breeches belted with gold-worked, purple leather with a wicked-looking skian scabbarded at his side. His feet, ginger-tufted and sporting dirty nails like goats’ horns, were bare and tattooed with scorpions. The nameless youth
had a good view of these feet because he was lying in front of them. To his left lay Captain Chauvond and the cabin boy. To his right reclined half a dozen merchant aeronauts, also bound with ropes.
“Deformed!” proclaimed the red pirate. “Twisted, ugly, and deformed!” He leaned closer to the youth and said confidentially, breathing garlic, “Hogger has one eye, Kneecap’s got a wooden leg, Black Tom is missing three fingers, Fenris be earless, and Gums ain’t got a tooth in his head. A man has to
be ruined to sail on the Windwitch. Fires of Tapthar! You’ll fit in
well here, mo reigh, you’ll fit like an egg in its shell!”
He laughed, revealing gaps in his dentition that seemed to
go through to the back of his head.
“Me, I’m physically perfect. See that?” He flexed bulging
sinews in his right arm, which was tattooed with ravening birds,
their toothed beaks gaping, looking faintly ridiculous.
“I wouldn’t like to meet me in battle, mo reigh. It’s the brain—
the brain that’s twisted. I’m mad, see?” His jutting eyebrows
shot up and down rapidly. “Sianadh the Bear, unconquerable
in battle!”
He roared, a wide grin splitting his weather-lined face. The
cabin boy whimpered.
“What is the matter, tien eun? See, I unbind you and your
reigh friend.” Squatting, he did so. “You two lads are to join
us! You shall be buccaneers on the upper drafts. Every now
and then, such as today, we lose a few hearty hands. Captain
Winch needs to replace ’em with young ’uns nimble in the
rigging. Don’t look so sad! ’Tis better than being sold as slaves
in Namarre like these shera sethge shipmates of yours here.
And you, Captain, are to be ransomed to your Cresny-Beaulais Line.”
Captain Chauvond groaned, licking blood from his lips.
“Now, don’t bleed all over the clean deck. You lads, see
that keg over there? Go and fetch water for yourselves and your
shipmates. Make yourselves useful or Winch will notice you
and you’ll taste the lash. We sink anchor at dusk, then we eat
and suffer.
’Tis a shame we left your cook in a tree—ours is a
sadist and poisoner—’twould have been kinder to our aching
bellies to have swapped one for t’other. Look lively there!”
The two youths hurried to obey.

You can find The Ill-Made Mute on Amazon or at all good bookstores.