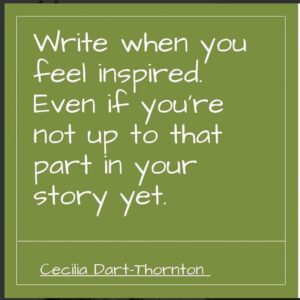 Go With the Flow.

I don’t know about other writers, but I find that inspiration can strike me at the most unexpected times.
These times are not entirely unpredictable – they’re usually periods when my mind is drifting; when I’m not thinking of anything in particular. That’s when inspiring, amazing, intriguing ideas will often bubble to the surface. If I sat down to “deliberately think”,  this burst of creativity would probably not occur. It has to be spontaneous. And when inspiration hits, it feels like such a rush! And that is when, if at all possible, it’s best to put pen to paper.
When you do, pay no heed to spelling, grammar or punctuation – just write!

The secret of it all is to write in the gush, the throb, the flood, of the moment—to put things down without deliberation—without worrying about their style—without waiting for a fit time or place. I always worked that way. I took the first scrap of paper, the first doorstep, the first desk, and wrote—wrote, wrote. … By writing at the instant the very heartbeat of life is caught. 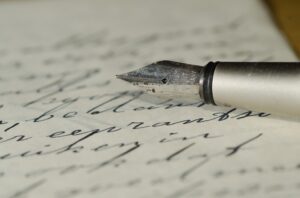 That said, it would be impossible (for me) to write a whole book if I only wrote when inspired. The inspired writing provides the basic “clay” from which the “sculpture” can be formed. It’s disciplined writing that finesses that basic clay. Disciplined writing takes place when that bright glow of inspiration has faded and you need to make sense of it all, insert “bridges” between scenes, get rid of any cliches that may have crept in, add some description, fix the spelling, grammar and punctuation, and so on.

There’s an interesting article that touches on this topic at The Write Practice, here. It’s called “Writing Inspiration: Do You Really Need It to Write?” by Joe Bunting. 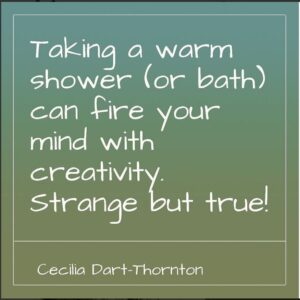 Many authors find that when they’re having a bath or shower, or bobbing about in the ocean on a warm, sunny day, that’s one of the best times for inspiration to strike. Your mind is free and unfettered, allowing subconscious thoughts to rise to the surface and blend in interesting ways.

Sometimes, it’s when you’re simply enjoying the calming sensation of the water, and not deliberately trying to work out something in your head that answers and brilliant ideas can flash forth. 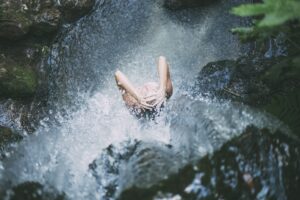 If inspiration tends to hit you when you’re bathing, have some sort of recording device on hand to help you remember all those wonderful ideas – paper and pen, or even a battery-operated audio recorder (such as a smartphone!).
A whiteboard with waterproof pens, stuck to the shower wall would be useful. It would make it easier to remember your flood of genius-quality ideas!

An extract from The Ill-Made Mute:

Speaking of water, here’s a passage from The Ill-Made Mute in which Imrhien and Sianadh find a mysterious, remote waterfall called Waterstair, reputed to conceal a vast wealth of treasure.

“Half-asleep, Imrhien stumbled onward, lending support
to her companion’s arm. As dusk approached, thunder, which had
been rumbling far off, grew louder. It was a sound that had
been audible now for a long time, yet in her dulled state of
awareness the girl had ignored it.
By now they had come right under the shadow of the
mountain wall. As they rounded a bend in the river, the trees
drew back. Pale sunlight poured down from open sky, a hissing
roar assaulted their ears, and an awesome sight greeted them.
Filled with rainbows, its millions of droplets appearing to
float slowly down from such a great height, a waterfall hung
like a silver curtain. Its hem was lost in spray over a rocky pool.
Sianadh leaned on his staff and laughed weakly.
“We have found it, chehrna . . . ”

“Sheets of jade water plunged, hurtling from the
heights in a torrent of raw energy. Rainbows
bridged its quivering mists. A haze of droplets
hung in the air, pearling every leaf and grass
blade that fringed the pool, beading hair and
eyelashes, collecting in miniature crystals on the skin. The
continuous roar pressed around Imrhien’s head, drummed and
threshed in her ears like the sound of battle.
The rocky basin receiving the waterfall was cradled
in the heart of a dell whose gently sloping sides were clothed with tall,
spindly trees . . .”