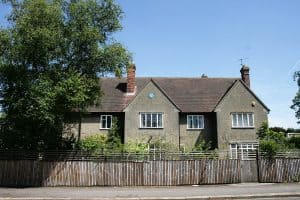 ON 24 MARCH Locus Magazine reported that the campaign to buy Professor JRR Tolkien’s house at 20 Northmoor Road, Oxford and turn it into a literary centre dedicated to Tolkien, had failed.

He and his family lived there between 1930 and 1947 while he was professor of Anglo-Saxon at Oxford University, It was there that he wrote The Hobbit and the first two volumes of The Lord of the Rings.

Some years ago I visited that address and viewed it from the street, it being a private residence. My visit was part of an informal tour ‘In the Footsteps of Tolkien’, organised by a couple of friends, with whom I travelled.

What a glorious jaunt it was. We went to every place he was known to have set foot in the UK. These included the Eagle and Child pub where The Inklings used to gather, the cave houses at Alderley Edge that are said to have inspired hobbit homes, the hotel room in which Tolkien and Edith spent their honeymoon, at The Plough and Harrow Hotel in Birmingham, the old mill at Sarehole, Mosley Bog, the Rollright Stones, King Edward’s School, Birmingham, and 264 Wake Green Road, one of Tolkien’s childhood homes. And there were more.

Along the way we dropped in for a cuppa with Tolkien artist Alan Lee in Chagford, Devon.

I was disappointed to read that the scheme to purchase Northmoor Road had failed, until I read this: ‘The Tolkien Society refused to support the project, noting that “the property itself is a listed building in a conservation area – with a blue plaque proudly showing its connection to Tolkien – meaning the property is well protected under the law and not in need of rescue.”’

This is indeed true, and as Locus states, ‘ the organizers [of the campaign] announced that “we have been offered an alternative home for the first literary centre dedicated to Tolkien in a very suitable venue in the heart of Oxford that fits our needs perfectly for in-person courses and a base for tours visiting the locations that inspired Tolkien.”’

It has, for a long time, bemused Tolkien fans that there exists no centre dedicated to him in the UK, as there is for other authors such as the Bronte sisters, Beatrix Potter, Arthur Ransome etc. Let us hope this oversight is soon rectified.