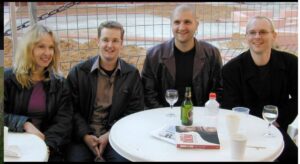 Here’s a photo by @hartpix. It’s myself with a trio of amazing writers at a Writers’ Festival, pre-Covid.

Matthew Reilly wrote his first book, Contest, at the age of 19, and self-published it in 1996. It was rejected by every major publisher in Australia, leading him to self-publish 1,000 copies using a bank loan. He was discovered when Cate Paterson, a commissioning editor from Pan Macmillan, found a self-published copy of Contest in a bookstore. Pan Macmillan signed him to a two-book deal. He has since sold over 7 million copies of his books worldwide, in over 20 languages.

China Miéville often describes his work as weird fiction and is allied to the loosely associated movement of writers called New Weird. He has won numerous awards for his fiction, including the Arthur C. Clarke Award, British Fantasy Award, BSFA Award, Hugo Award, Locus Award and World Fantasy Awards. He holds the record for the most Arthur C Clarke Award wins (three).

Sean Williams is the author of over eighty published short stories and thirty-nine novels, including Twinmaker and (with Garth Nix) the Troubletwisters series. He has co-written three books in the Star Wars: New Jedi Order series. His novelisation of Star Wars: The Force Unleashed was the first novelisation of a computer game to debut at #1 on the “New York Times” bestseller list. He is a multiple recipient of both the Ditmar and Aurealis Awards.

✨✨✨
Check out these three incredibly popular authors, if you have not yet done so.

And may the new year bring you health and happiness!