The Shapes of Letters 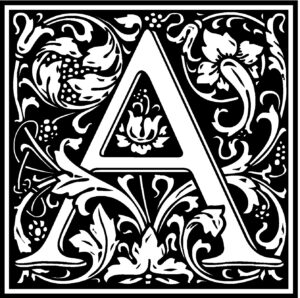 For me, the shapes of letters of the alphabet have deeper meanings than merely the sounds they symbolise. Is this perhaps a characteristic of synaesthesia?

In particular, for me, initial letters seem to carry associations.

The capital letters A and V for example, with their chevron shapes, remind me of arrowheads or lanceolate leaves, or the streamlined wings of a raptor. They are associated with strength and vigour.

M is motherly, reliable, nurturing. Z is “out there”, alien and wild, exciting and almost certainly dangerous.

The letter I, both upper case and lower case, is light, golden, elfin.  How much have I been influenced by Tolkien’s perfect creation of names? I did read The Lord of the Rings at an early age, so perhaps marvellous “I” and “L” studded elvish names/words such as Galadriel, Laurelindorenan, Glorfindel and Simbelmynë sank into my childish imagination and gave rise to those associations.

Hundreds of years later, William Morris included some of the most glorious initiums in his books, printed by the Kelmscott Press.  He had 40 custom-designed initial letters specially block-cut for use in his books.

The letter A featured in this post is from the Goudy Initialen font. American Frederic W. Goudy designed these floriated initials in the early 1900’s, and they are among my favourites.

Do the shapes of letters hold other meanings for you too?